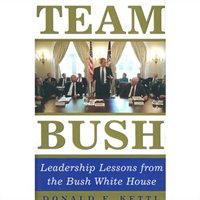 《TEAM BUSH》簡介：
LEADERSHIP STRATEGIES BEHIND ONE OF THE MOST POPULAR PRESIDENTS IN HISTORY~How the Commander-in-Chief commands~George W. Bush has surprised even his harshest critics with his leadership talents and discipline. As this country's first MBA president, Bush formed his unique leadership style managing businesses, not government offices. Team Bush is the first book to explore these unique methods and tactics he has employed to become one of the nation's most popular commanders in chief in recent history.~From "hiring" the most diverse and effective cabinets in history, to dealing with the crisis and war sparked by the events of September 11th, this compelling leadership book takes readers into the mind and methods of America's 43rd president, and shows managers how these methods can be used to boost productivity in their own organizations.~This fast-paced book pulls no punches as it showcases President Bush's successes and strengths while detailing his mistakes and weaknesses. Focusing on the actual events and outcomes of Bush's first two years in office, it discusses:~~The strategy behind Bush's coup in the mid-term election~Lessons learned from his managing of the September 11th crisis~How Bush recognizes and learns from his very public mistakes~

作者簡介:
DONALD F. KETTL,PH.D.is professor of political science and publis affairs at the Robert M.La Follette School of Public Affairs at the Uniersity of Wisconsin-Madison,The executive director of The Century Foundation of Project on Federalism and Homeland Security,Dr.Kettl is also a nonresident senior fellowin governmental studise at the Brookings Institution and former director of the institution's Center for Public Management.He has written,cowritter,or edited over a dozen books,including Deficit Politics and The Transformation of Governance.