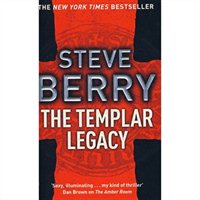 《The Templar Legacy》簡介：
Stephanie NeUe in the US Justice Department. Now she seeks his help again to crack a series of puzzles that have confounded experts for centuries - and could Lead to the legendary Lost treasure of the Knights.
But Malone soon realizes someone else in on the trait-someone prepared to commit the ultimate crime in pursuit of the ultimate prize Malone and NeUe find themselves in a heart-stopping race through the villages, castles and cloisters of Europe in pursuit of a secret that.
作者簡介：
STEVE BERRY's first two novels, The Amber Room and The Romanov Prophecy, were national bestsellers. His third novel, The Third Secret, was a New York Times bestseUer. He lives on the Georgia coast and is a lawyer who has traveled extensively throughout the Caribbean, Mex-ico, Europe, and Russia. Rights to his books have been sold in thirty-two countries. He is currently at work on his next thriller. Visit his website at www.steveberry.org.